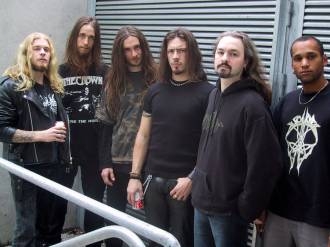 Who is the main songwriter in Scarve? From what I’ve heard, it is a complex mixture of slow guitars and enormously fast drumming. How did it end up like this?
We use many different ways of writing music, but on Irradiant, Sylvain brought in most of the strong ideas. He’s very good at arranging riffs, and wrote a song such as “The Perfect Disaster” almost sole-handedly. Patrick and myself also brought in a lot of ideas, and Pierrick had some input too, beyond the fact that he wrote lyrics to two songs. Once we have decided about the basic structures, every one of us refines his own parts, so the writing process is definitely a band-effort in the end. As for your description, I wouldn’t exactly describe our sound that way, but to resume briefly, our music ends up the way we play it and the way we like it – those are the only considerations that ever come to our minds.

You have been compared a lot with Meshuggah and Fear Factory — do you agree with this in any way? If you have to compare Scarve with any other band, which ones would they be? Can you hear any of your favourite bands in the music of Scarve?
Meshuggah and Fear Factory have been influences to us since our early days. Both bands have developed their own style into something truly unique, and we respect them immensely for that. Meshuggah is probably my favourite metal act nowadays. Comparing us to others, well, that’s a tough call… I definitely hear some Morbid Angel in our music, and maybe a little bit of Soilwork and Devin Townsend – but I prefer to leave it to the listeners to enjoy Scarve the way they want to.

Your homepage states that Scarve was created in 1994 but Your first full album was released in 2000. Was it hard to get a record deal with any label? Is there going to be some kind of compilation of older and rare tracks of Scarve?
Yes, it was quite difficult to find a label back when we started out. The metal scene was on an all-time low, and not much was happening outside of the underground, especially in France. We needed those years to grow musically anyway, and I think we got a contract at the right time. Concerning the older stuff, our first album Translucence will be re-released by Listenable with a bonus DVD after the next record comes out, probably sometime in 2006. But I don’t know about the demos… Our line-up and sound were pretty different, so we feel it might be a bit anecdotic to release this stuff now.

How was your co-operation with Soilwork? How much had you heard this band before? First, I did not know it was you playing, I thought that Soilwork has found very similar replacement to Henry Ranta who had played on all previous albums. Did you change anything in your style to play more Soilwork-like? Did you learn anything while working with these guys?
Well, it’s amazing to work with Soilwork! They are great people and excellent musicians. I started to listen to them after Natural Born Chaos came out, because I wasn’t a big fan of their first records to be honest (even though I appreciate them much more now, after having played some of the songs live). No, I absolutely didn’t change my way of playing for the recording of Stabbing The Drama. They wanted me to play the way I usually do, and that’s exactly what I did. I simply tried to give the songs what they needed drum-wise, and since Soilwork have really developed their own style, I guess it’s quite logical that the drum-beats remind their past work in some ways. Moreover, Henry Ranta is a great drummer who has certainly inspired me! I learned a lot of things working with Soilwork, and I still do nowadays, but they’re just like the other bands I’ve played (or play) with: passionate people doing what they enjoy most.

How are things between you and Soilwork — from the recent interviews with Björn and Sven I understand that they want you to continue playing with them. Are you going to?
I will be touring with them this year, mainly in the USA/Canada and at some summer festivals in Europe. We don’t know exactly what is planned after that. Scarve will record the follow-up to Irradiant in the end of this year, so everything depends on how we can combine both bands’ schedules. The one sure thing is that I will not be leaving Scarve, and that’s also why I’m not 100% officially part of Soilwork, even though both them and I really wish and hope that we can keep on playing together for a long time. 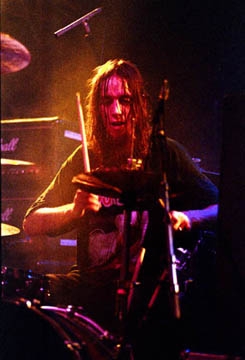 I see that you have had quite many side-projects apart from Scarve, which ones are you currently working with?
Phazm (which besides myself includes Pierrick and Patrick) is pretty active: Osmose released our first album in November 2004 and we did a killer mini-tour with Impaled Nazarene and Yyrkoon last month. There’s also Stenval (with Sylvain and Pierrick) who’s first album will be released this year, and MLB (Manu Livertout Band), a guitar-oriented act with Guillaume and Loïc, who’s second full-length is currently being recorded. Obviously, most of my time goes to Scarve and Soilwork, so Phazm and MLB might do some shows with a session drummer. I haven’t found a way to clone myself yet, haha!

Are there any bands that have impressed you lately in some way? Is there any band you are learning from?
Recently, I really enjoyed Jesu (Justin Broadrick’s new band) which is truly excellent. I’ve also been listening a lot to Katatonia’s recent albums, Tom Waits’ Mule Variations, Meshuggah’s I, and new records by Black Lung and Carnival In Coal. The last band that has really impressed me was The Dillinger Escape Plan, they go beyond crazy on stage! You learn from every musician or band you see, but I must mention a masterclass in Montluçon (France) I played at last week, and where a lot of excellent drummers performed. This guy called Thomas Lang really kicked the shit out of me – he’s without a doubt one of the world’s very best drummers!

I think I am correct if I say that here in Estonia, we are not too familiar with French metal scene. What would be your favourite French bands? Any band that should not be missed?
The scene in France is better than ever. We have a lot of killer bands, more and more good shows and an active audience. There are even some great festivals such as Fury Fest, Killer Fest and Metal Therapy. I highly recommend Gojira, Garwall, Eostenem, Yyrkoon, Lyzanxia, Solekahn, Taliandörögd, Kaizen, Act Of Gods, Pitbulls In The Nursery, Carnival In Coal, Amethyst and Anorexia Nervosa. Some of the older acts are still very productive and worthy too, such as S.U.P., Mortuary, No Return, Loudblast, Inhumate and Misanthrope. Beware of the French Metal Assault!

Is there anything you can say about the next Scarve album. In what direction has your music developed? What are your plans for 2005?
I can’t say much about our new stuff at this point, because we’ve only just started writing. But I’m pretty sure it will take the sound of Irradiant to a higher level, because that’s our goal right now! We will be heading to the studio probably in November, and Daniel Bergstrand will once again produce the record. In 2005, we will continue touring in Europe, including festivals in Finland (Tuska) and Norway (Southern Discomfort) as well as shows in France, Denmark, Iceland, Italy, Belgium and many more. All the details can be found onwww.scarve.net.

Thanks a lot for this interview, I’m looking forward to be blown away by Scarve soon!
Thanks to you Jüri for your support, and to the readers for their interest! See you at Tuska!