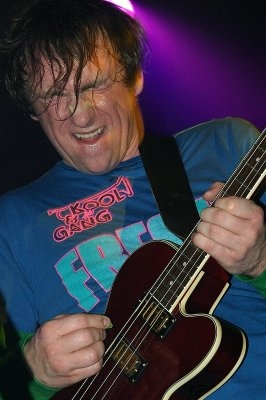 Where are you taking us (your listeners) to?

Adam: We usually take our listeners to the realm of idiocy and absurd combined with some subliminal messages contained in our songs that are designed to annex Estonia into Poland in order to create a Polish-Estonian Union, the kind like we had in the old days with Lithuania. There is a story about this very subject on our websitewww.groovski.com under "Groovski News"
section. As far as the sound goes, we just wanna take you to the rock land. The Rock Land where the rock is simple, repetitive and power full (to Groovski members at least). Preferably with some delay on vocals to make things just a bit psychedelic and poppy enough to make things innocent and silly.

Adam: 70’s were awesome: Budgie, Black Sabbath, Grand Funk Railroad, Hawkwind, Faust, Can, Neu. The Stones sucked in the 80s but were awesome in the 70s. But at the same time you had bands that were unbelievably horrible like The Eagles, Pink Floyd (after Syd Barret went crazy) and Kiss.
The 80’s, on the other hand, were disgusting and cheesy. For example, Def Leopard, Lover Boy, Journey, Europe. But if I think of The Fall, Jesus and Mary Chain, Birthday Party, early Sonic Youth, Mission of Burma I must admit that the eighties were kind of cool. The. 80s in Poland were the greatest time for the Polish music scene. There were some incredible bands coming out of Poland at that time: They all had a very unique post punk / new wave sound that could not be compared with anything else out there. Bands like, Brygada Kryzys, Republika, Siekiera, Smierc Kliniczna, Klaus Mittffoh, Bielizna. Meanwhile the 70’s in Poland were completely silent. I can’t think of a single band from Poland that came out in the 70’s. The moral of the story is: If one grew up in Poland, the 80s were awesome and the 70s sucked. If one grew up in America or UK than the 80s sucked and the 70s were awesome.
I grew up in Poland which means that to me 80’s were cool and the 70’s nonexistent.

Adam: Lo-fi guitar noise preferably with feedback is so cool. It gives me an incredible sense of rush. It feels like God is tickling my balls. It’s awesome and powerfull. The ideal kind of guitar noise is in some early recordings by Jesus and Mary Chain. I ‘ve listened to Psychocandy and some BBC recordings for almost 15 years now and I can’t seem to stop. I have seen them life 2 times and that’s where I understood the essence of a lo-fi guitar noise.

Leslie: Lo-fi guitar music is very cool. It is so warm and fuzzy, like your favorite sweater or teddy bear. You can always return to it comfortably, on a rainy day it might make you smile. It reminds you that you dont need high-powered cheezeball amps like metal heads to make fabulous guitar
sounds.

If a band’s career’s like a story with a beginning and end, then have you reached the climax yet?

Adam: We are the laziest band in the world. For us to sit down and organize enough to do anything that would further our "career" as a band is a monumental task. But I think we have yet to climax even though we are really, really old (30,32,33). I think the morale in the band is definitely higher
now since we have now a synthesizer player and a circuit bending guru Peter Edwards in the band. Unfortunately he could not make it to Estonia. He’s really awesome, he makes his own synthesizers. You can find his stuff on his websitewww.casperelectronics.com

Leslie: The climax of our story might very well be when the punkrockers of the Baltics States embrace us and love us as one of their own. 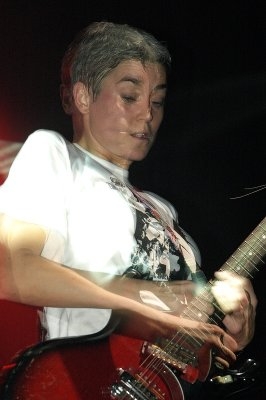 What’s so good about being Polish? Do you dig Kieslowski and Marek Piegus?

Adam: Since our president Kwasniewski decided to send Polish troops to Iraq, and since the CIA set up concentration camps for the detainees of "war on terrorism" in Poland, there is very little to be proud of… Kieslowski and Marek Piegus help our image only a little bit, but now I must hang my head in shame and ask the world for forgiveness. By the way, I’m not familiar with Marek Piegus. Is he a book character?
I missed that particular part of Polish pop culture.

One other thing that is cool about Poland is Graveland. The most insane black metal band in the world. They are on the mission to destroy Christianity in a largely catholic Poland. Even though I am not a big fan of metal, Graveland is awesome and Polish. They are like Joy Division of black metal. Right to the point, dark, primitive, psychotic and barbaric. There isn’t another metal band like them. I praise them to high heavens.

Adam: I love Sonic Youth. We all love them. We all grew up on them. Kim Gordon and Thurston Moore live in Northampton, Massachusetts, north from where we live and I heard from someone that knows them that they have an ugly baby.
When it comes to Full House, I always hated Stamos. I can’t wait for the Olsen twins to go into a drug rehab in a very near future.
Onion is awesome. My favorite headline is:"Attorney General John Ashcroft Uses a Cane to Point at Things". By the way, I am very impressed that you know The Onion and the Full House.

Leslie: All people should listen to Sonic Youth. People should also check out Kim Gordon’s band, Free Kittens. It is hard to believe how long the world has had to digest all the re-runs of Full House, yet we continue to have indigestion. There should be a law about letting children spend their entire childhood on one show. There should also be a law about letting them make that much money doing it. (I speak of Olsen emaciatwins and I am an anarchist running for mayor of my City). The Onion is funny, I guess you ask this question because of the style of our website?? I wish I could read more of the Onion. My favorite one is — Like boxes of shit in your house?? Get a cat.

Would you make the same sort of music in all possible worlds, or is it rooted much in our everyday life and pop culture ephemera?

Adam: When we first started we made music as a result of a big contempt for pop culture and we came up with CD in 1998 called Zahranna Brzda. That Groovski CD is really weird and innovative and pretty good, in my opinion. Later on we just wanted to rock and felt really good about it. That’s when the pop factor kicked in and we played feel good songs with doses of weirdness which is also cool with me.

I suppose that in the different worlds I would also make music the same way. As a result of my contempt for prevailing cultural trends and would come up with something innovative but later on in life I would want to embrace some prevailing trends.