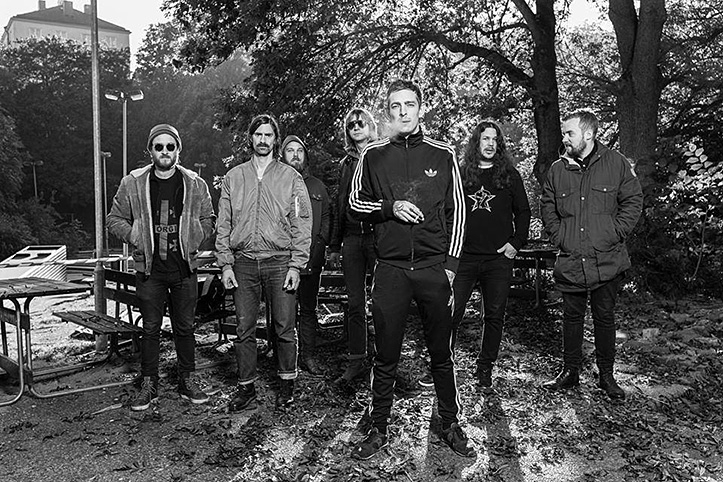 Is your EP an official release under a label? Where did you record it?

Konie, our synth-player, recorded the whole thing at his studio, Studio Cobra, here in Stockholm.

To me your EP sounds like an amalgam of Hawkwind-influenced, trippy space rock and the nihilistic, raw old-school punk reminiscent of some of Jello Biafra’s post-Dead-Kennedys material („Last Scream of the Missing Neighbors“, perhaps?), as well as some modern experimental (post-post-punk?) stuff like „Chemistry of Common Life“ era Fucked Up. Others have pointed out influences from the so-called Turbonegro scene and similarities to what Jesus Lizard, Skogen Brinner and Räjäyttäjät have been doing. Do you agree with any of these comparisons? How do you position yourselves in this landscape? Who are your „spiritual idols“ in music?

Benke: Maybe the monotony comes from Hawkwind, but that wasn’t something we thought about at the time. We were probably more into the spirit of Motörhead — you know, speed.

Most of us are old punks, so of course some things come from there. For me it was Stooges, Suicide, Sleaford Mods, techno and other electronic music, The Fall, Joy Division, Motörhead, Sex Pistols, Butthole Surfers, Uran GBG and tons of other bands. We just stole some riffs and arrangements here and there and then it became what it became.

Mostly we aspire to a feeling of “coldness”, something that just keeps on going, like what Suicide and some other electronic acts have done. The beat and the bass remain more or less the same, while guitar and synth passages change.

The title track „Research Chemicals“ is an excellent calling card — a long, ear-wormy, yet ambitiously fringe „mission statement“. To me it sounds like a sarcastic commentary on the current global drug war effort that, while apparently crumbling in some places around the world, seems to be still standing strong in Sweden. Have research drugs (or „novel psychoactive substances“) become a bigger problem now in Sweden than traditional illicit drugs? Do you believe there are more sensible solutions to problems associated with drugs than blanket banning and zero tolerance of users?

Sebastian: Your analysis of Sweden’s war on drugs is spot on. The amount of money and time wasted by the Swedish government due to their naive perception of drugs in society is ridiculous. I don’t think new psychoactives are a bigger problem than traditional drugs in Swede, but there was definitely a big boom a few years ago. Mephedrone was huge. I heard that Benke actually turned green for a few minutes once. Pretty cool! I had a few experiences with some of these legal substances myself, as mentioned in the song (“…bleeding from my ears”, “nosebleeds in the shower”, “You know it’s working when everything feels wrong”, etc. — M. K.). It’s amazing what science has achieved. God bless science and the internet!

Speaking of drugs and your music — „Can’t Get It Up“ is both funny and horrifying, but most of all sincere — possibly a better drug use prevention piece than any of the official anti-drug campaigns we’ve seen. Does it take balls to publicly discuss intoxication-induced sexual impotence, or is it a subject Swedes can talk about without false modesty?

Sebastian: I don’t think most Swedes would willingly talk about their impotence problems without false modesty, but I don’t have a problem with that. The song is very honest and kind of laughs at something most guys would never dare speak of. But the song also expresses the feeling of not giving a shit about the existence of one’s libido whatsoever, as long as the party is still going. It’s about taking speed and listening to music instead of having sex.

Continuing on the subject of sexuality — the rather clever track „I Want Her Fluids“ reeks of raw animal lust. Despite some jolly jabs (“She’s got a body like a computer”) in there, it seems to me that you were trying to strip the notion of romantic love of all arbitrary, high-brow, poetic euphemisms and succeeded in demonstrating that even something as base and unsavory as wanting someone’s „fluids on your face“ can still be lifted to cathartic artistic heights. Is there a real story behind this song, or is it all projection?

Sebastian: I don’t think it’s as deep as you suggest. This is straight up about primal lusts: bathing in a woman’s bodily fluids. Everyone’s happy and has a good time. I think it’s pretty romantic.

What are the currently active bands — in both Sweden as well as abroad — that you’d most like to tour with?

Benke: Ohhh… Tough question! There are so many bands/artists, but… Sleaford Mods, Container, Bones, Danny Brown, Death Grips, ASAP Rocky, Ho99o9, Run The Jewels, Endless Boogie, Kid Congo, Beau Wanzer and 10 000 others. Swedish bands that are awesome and would be great to tour with include Uran GBG, Exorcist GBG, Paper, Mascara Snakes, all bands of Mattias Alkberg, Pascal, Les Big Byrd, Abdulla Rashim, Varg (and all the Northern electronics dudes), more or less all of the bands on Höga Nord Rekords, and some 20 more bands/artists that I forget now.

Do you plan to do any touring in the near future? What about an album?

Benke: Hopefully we are going to tour some of Europe this fall. There will be a new single out in September. We hope to get a full-length album out in November or December.

Off the top of my head, I can’t come up with another punk band that has so many members (is it seven?). The internet doesn’t really tell who’s doing what in the band — can you help me out with that info? Also, how many other active bands do all of the members play in besides Viagra Boys? Is there a distinct scene happening in Södermalm that the world should know more about?

Benke: There are five of us in the band, but six live — me, Sebastian, Benjamin on guitar, Konie on synth, Tor on drums and session member Oskar on saxophone.

Me and Benjamin play in Pig Eyes and Neu-ronz, but neither of these bands is particularly active at the moment. I also play in a band called Södra Sverige. Konie plays in Les Big Byrd. Tor plays in New Keepers Of The Water Towers. Sebastian does some electronic music by himself, but hasn’t released anything yet.

There is no scene happening in Södermalm; it’s just some people doing some music. Some of us should do more… But we’ve got a habit to support and that takes a lot of our time.

You recently played at the Sideways festival in Turku, Finland; how did it go?

Benke: It went well. Due to bad weather and we had to change stages in the last minute — had to perform inside instead of outside. We played at six o’clock in the afternoon, so the Finns were quite sober. Nobody went crazy, but nobody left the arena either, so I think they liked it. Next time it will be crazier and more fucked up!

Do you have any specific expectations regarding Tallinn/Estonia — perhaps some stereotypes that you hope to prove or disprove?

Benke: I think Tallinn will be awesome! Everybody will be high and go berserk! At least, these are my expectations. DiveDiveDive seems to be a cool fest with a great mix of different kind of music, and Estonia seems to have a cool/good music scene right know — people doing whatever the fuck they think is good and not thinking about whatever the “trendy shit” happens to be.

Viagra Boys is a controversial name to say the least — easy to remember, yet preposterous on several levels. How did you come up with that and how old were you at the time? Were chemically supported child boners involved at any point?

Benke: It was our good friend Jonas Nyberg (a tattoo artist — M. K.), who came up with the name. We were probably high on speed at the time. As a matter of fact, we had a an even more controversial name before, but Viagra Boys seems to work better.

Sebastian: The name of the band represents the failure of man in modern society. We are the lowest of the low, proud of nothing.

Do you think that border-defying artistic expression in general and punk rock in particular have the potential to change the world for the better (or perhaps for the worst) in these somewhat chaotic and tumultuous times?

Benke: Maybe. You just do what you gotta do. This society isn’t just for us, so we simply have to do something. We don’t have a choice. If I didn’t do this or something else like this, and had to work at a construction all day and nothing else instead, I would probably kill myself or do drugs until I turn invisible.

Sebastian: Everything sucks in the world right now, but I’m not doing anything to “change” anything, so to speak. As Benke said, there’s nothing else for us to do.